In Aotearoa, before the GFC a ‘normal’ rate of insolvencies involved about 13 businesses failing every year. Failures ranged from large corporates usurped by innovative upstarts to businesses whose product didn’t survive the test of the market.

“We know that periods of macroeconomic turbulence are difficult to navigate for businesses, but there is little research on how this affects firms in New Zealand,” said Dr John McDermott, Executive Director of Motu Economic and Public Policy Research.

“It is my hope that our new research will help New Zealanders understand the dynamics of the macroeconomy. In particular, it could potentially be useful in identifying the probability of future recessions and identifying their severity early on,” said Dr McDermott, who co-authored the report with Dr Viv Hall from Victoria University of Wellington.

Statistics from the Ministry of Business, Innovation and Employment show that the Global Financial Crisis changed New Zealand’s economic and social environment in ways that overwhelmed more than the normal number of businesses.

“A sharp increase in the numbers of corporate insolvencies took place in early 2008. This was some months before the fall of Lehman Brothers on 15 September 2008, and some months after the U.S. credit crunch began in July 2007,” said Dr McDermott. 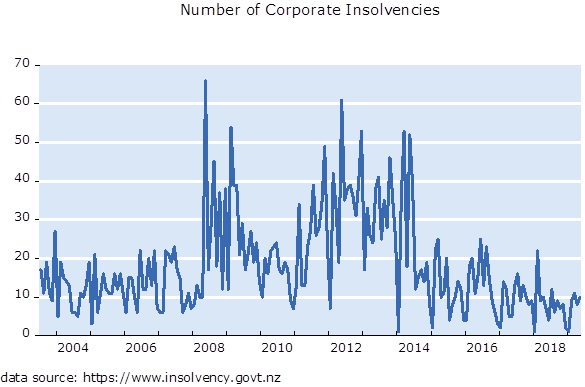 The single most important macroeconomic factor that led to a surge in business failure was costs, with input costs rising sharply relative to output prices.

“In the wake of the Global Financial Crisis, customers were more resistant to price increases and so businesses faced with rising costs saw profits turn to losses, forcing some businesses into bankruptcy,” said Dr McDermott.

Personal insolvencies also surged during the Global Financial Crisis but the reasons were very different.

“Reduced employment opportunities and falling house prices led to the increase in reported personal insolvencies. Not surprisingly with few jobs and falling asset values, households put a brake on their spending. The key driver of small business profitability was gone. Perhaps even more important was the reduced job security which lessened some people’s ability and willingness to repay debt obligations,” said Dr McDermott.

The research paper “Changes in New Zealand’s Business Insolvency Rates After the Global Financial Crisis” by Viv B Hall and C John McDermott is available on the Motu website.

Businesses do fail.
Things get worse in recessions
as costs rise sharply.

Changes in New Zealand's business insolvency rates after the GFC (2020)

Many challenges hinder Māori to realise their aspirations for native forestry on their land.

What is the nature of subjective wellbeing inequality?