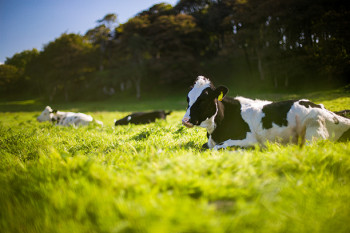 Using the New Zealand Monitor Farm Data (NZMFD), this paper explores the cost-effectiveness of two mitigation options to reduce biological greenhouse gas (GHG) emissions on farms: reducing stocking rate (SR; the number of cows per effective hectare of dairy land); and increasing animal performance (AP; measured by production of milk solids (MS) per cow). These mitigation options have been defined as “no cost” because, if applied together, they could reduce the carbon footprint of farms while also maintaining or even improving profits (de Klein & Dynes, 2017).

The paper has two main findings: high-AP farms show significantly lower emissions intensities and higher milk profitability; and higher SRs on farms are significantly associated with lower emissions intensities while not being significantly associated with milk profitability or negatively associated with profit per hectare. These results imply that higher levels of AP reduce the GHG intensity of the farm and increase profit – a “no-cost” option – but unless either the SR or the area under dairy farming fall, an increase in AP will lead to an increase in absolute emissions. However, our results cast doubt on the idea that reducing SR is a no-cost way to achieve absolute emission reductions. The two options do seem to constitute a no-cost outcome when combined, but potentially the same mitigation could be achieved with lower loss of profit by reducing the area of dairy land while maintaining high SRs and increasing the performance of the animals.

A model looking at dairy stocking rates and mitigation is freely available here.

Barriers to Adoption of No-Cost Options for Mitigation of Agricultural Emissions: A Typology