About two students at an average-sized primary school will reach the National Standards in reading, writing and mathematics because of the school’s access to fibre broadband.

A study from Motu Economic and Public Policy Research Trust uses the fact that schools gained access to UFB at different times to evaluate the effect on academic performance. It is the first research anywhere in the world to specifically evaluate the effect of fibre broadband on educational achievement. 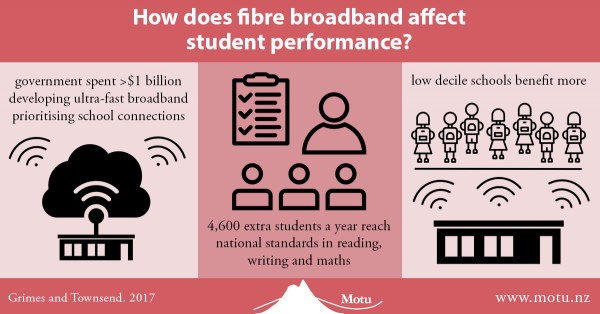 “Having fibre broadband in a school increases National Standards passing rates in each of the three subjects by about 2 students at the average-sized primary school and by about 4600 students across all the schools within our sample,” said Arthur Grimes, Senior Fellow at Motu and co-author of the study.

For students who are already above the National Standard, the effects are substantially smaller.

“We found some evidence suggesting that students at low decile schools benefit more than students at higher decile schools. If our estimate for the effect on the writing National Standard at Decile 1 schools, is correct it would mean that on average providing fibre broadband allowed an additional seven people at each Decile 1 school to pass,” said Dr Grimes.

“There could be all sorts of reasons for the increase, perhaps fibre broadband expands the set of technologies available, which may allow teaching to be more individualised and more engaging, or may facilitate better monitoring of student performance. Alternatively, greater computer skills could lead to children improving their academic skills. UFB may also allow schools to perform previously-expensive tasks cheaply, reallocating their resources towards academic achievement,” said Dr Grimes.

Because there are fewer data points for secondary schools, the study found no evidence for fibre broadband affecting NCEA pass rates. It also found no large differences in effect sizes among ethnic groups or genders, or between urban schools and those which are more isolated.

The study, The Effect of Fibre Broadband on Student Learning by Arthur Grimes and Wilbur Townsend received funding from Huawei New Zealand.

The Effect of Fibre Broadband on Student Learning (2017)