A strong majority of New Zealanders are concerned about climate change and taking actions that reduce household emissions, according to a recent survey.

Researchers at Motu Economic and Public Policy Research, an independent, not-for-profit research institute, and Victoria University of Wellington designed the survey of about 2200 New Zealanders aged 18+. The survey was conducted by Horizon Research Limited from 28 July to 1 September 2014 with support from the Sustainable Business Council.

The survey showed that about 87% of New Zealanders are at least somewhat concerned about the effects of climate change on society in general. 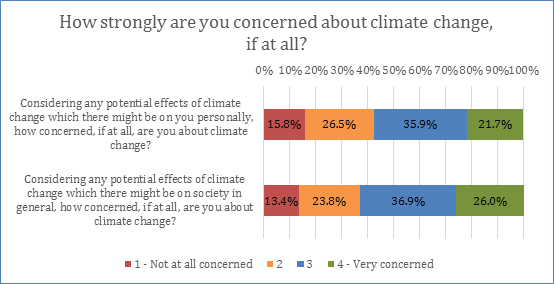 Last week, the Government announced it would consult on New Zealand’s post-2020 climate change contribution. Submissions are due by 3 June.

A strong majority of respondents in the survey intend to take common household actions that reduce emissions, ranging from installing low-emission household products to conserving water and reducing their home energy use. Fewer reported intentions to reduce car or air travel or avoid or reduce consumption of meat and dairy products, activities which together account for about 56% of New Zealanders’ household consumption emissions according to other research by Motu. About 42% agree their actions can make a difference to reduce climate change, and 37% are undecided.

“The Intergovernmental Panel on Climate Change reports that to avoid more dangerous levels of climate change the world needs to transition toward a zero-net-emission global economy by the end of the century. Households could contribute meaningfully to this transition through their actions as consumers,” said Catherine Leining, a Motu Policy Fellow.

“If you are already highly motivated by the impact of climate change, then your belief in your effectiveness doesn’t matter as much and vice versa,” said Catherine Leining.

Cost saving was identified as a key action trigger. Of those surveyed, 66% said they would use less energy and 59% said they would be motivated to generate their own renewable energy if there was financial support for products that helped them do so.

People below age 55 generally show higher levels of concern about climate change and have a greater belief in their ability to help. People aged 18-34 are more likely to engage in environmental citizenship activities such as speaking out in conversations with family and friends, voting on environmental grounds and joining environmental demonstrations.

Leining says information about climate change impacts and solutions should cater for differences in perception between men and women and between people of different ages.

“If these findings represent a culture shift among younger generations moving into leadership positions, support for effective climate change action could rise on the national agenda.”

Further analysis is available in the Motu Note From Fact to Act: New Zealanders’ Beliefs and Actions on Climate Change. You can also check out the Horizon Research report on the survey results.

Motu Economic and Public Policy Research is an independent research institute operating as a charitable trust. It is the top-ranked economics organisation in New Zealand and in the top ten global economic think tanks, according to the Research Papers in Economics (RePEc) website, which ranks all economists and economic research organisations in the world based on the quantity and quality of their research publications. According to RePEc, Motu has five of the top 30 individual researchers in New Zealand. The survey was developed under Motu’s programme “Shaping New Zealand’s Low-Emission Future.”

The survey “New Zealanders’ Climate Change Actions and Attitudes” was designed by Catherine Leining, Policy Fellow, and Suzi Kerr, Senior Fellow, at Motu in collaboration with Taciano Milfont, Deputy Director of the Centre of Applied Cross-Cultural Research in the School of Psychology at Victoria University of Wellington. It was administered by Horizon Research Limited to 2246 New Zealanders aged 18+ who are members of the HorizonPoll national online research panel. The survey was supported by the Sustainable Business Council (http://www.sbc.org.nz). Results were weighted to reflect the 2013 New Zealand Census of Population and Dwellings. The survey has a statistical margin of error of 2.1%. The views expressed in this media release are those of the author.

From Fact to Act: New Zealanders’ Beliefs and Actions on Climate Change (2015)