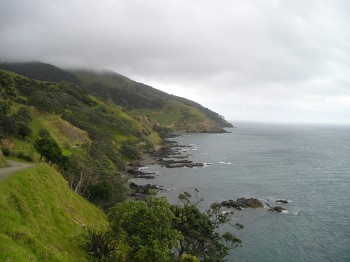 A new three year research project beginning this year will identify the opportunities and barriers for Māori land on the East Coast that could be used for native forest regeneration for carbon farming.

“With the mānuka honey industry taking off and the Paris Agreement causing carbon prices to increase, earning an income from native trees may become lucrative. These days, converting Māori land to native forest carbon farming is a serious business opportunity worthy of study,” said Panapa Ehau, managing director of charitable company Hikurangi Enterprises in Ruatoria who is working with Māori landowners on the East Coast to identify alternative land use options.

Motu Economic and Public Policy Research Trust, Hikurangi Enterprises, and Victoria University of Wellington will work together on the project as one of eight initiatives receiving $3.3 million through the Sustainable Land Management and Climate Change Research Programme (SLMACC) funded by the Ministry of Primary Industries.

Nuhiti Q is a 1,000 ha sheep and cattle farm near Tokomaru Bay that entered the NZ Emissions Trading Scheme in 2012 and aims to be carbon neutral by 2020. Since launching its native regeneration scheme in 2010, Nuhiti Q has managed to retire stock from the land, as well as fence and plant over 70 hectares of land with eucalyptus as permanent forest. The income they received from the ETS, alongside profits from their honey, oil and nut products, meant they didn’t lose money from retiring the grazing land.

In September 2016, Gull New Zealand joined forces with Nuhiti Q to help with the restoration of their land. Under an initial two-year agreement, Gull have purchased 12,000 units of Nuhiti's carbon credits totalling just over $220,000. This money will be put towards fencing repairs and planting more mānuka.

The research will initially use the agreement between Nuhiti Q and Gull Oil as a case study and engage other Māori land blocks and major emitters to look at the strengths and weaknesses of different arrangements for native reforestation. It will also work with stakeholders to help generate a variety of tailored contractual agreements and processes.

“The aim of the project is to provide insights on how communities and landowners can efficiently use carbon markets to encourage profitable native forest regeneration” said David Fleming Muñoz, Research Fellow at Motu Economic and Public Policy Research.

“We would like to see more native forests. They are a long term carbon store that helps stabilise the climate. They also support biodiversity, protect watersheds from erosion, improve water quality and make the landscape more attractive. This kind of thing also provides local jobs given the fencing, and pest and weed control work needed.” said Suzi Kerr, a Senior Fellow at Motu who is also involved in the project.

Hikurangi Enterprises will use its existing relationships with Māori landowners on the East Coast to identify opportunities for increasing sustainable use of natural resources.

Ruatoria based researcher Pia Pohatu will be focused on engaging Māori landowners as part of the project while researchers from Motu will work with emitters interested in carbon credit deals.

Motu will also evaluate current and future engagements between NZ carbon unit purchasers and Māori groups as they evolve and generate different outcomes, including the role of contracts and processes. Two post-graduate students from Victoria University of Wellington will also be involved in the research.

Barriers to Adoption of No-Cost Options for Mitigation of Agricultural Emissions: A Typology (2017)