The Government spends millions per year on direct subsidies for research and development (R&D) in New Zealand businesses.

New research by Motu Economic and Public Policy Research - a not-for-profit, non-partisan research institute – found that receiving an R&D grant almost doubles the probability that a firm introduces a major innovation, defined as a product or service that is new to the world.

Government support for R&D ranged from NZ$33 million to NZ$90 million per year during 2009–2013 in various forms, including training, advice and funding. There were two main types of R&D funding: project grants and capability building grants.

Adam Jaffe and Trinh Le from Motu studied the levels of innovation among firms who received subsidies as compared to those who were not funded using data from New Zealand’s Longitudinal Business Database. This is a longitudinal database that links administrative and tax data with survey data.

Jaffe and Le used seven measures of innovation outputs. Firms that received R&D grant in the previous three years were more innovative than other similarly characterised firms by every measure. 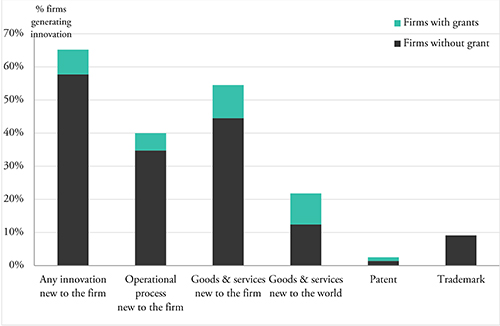 The study found no evidence that the effects of R&D grant receipt on these measures of innovation differ significantly between small to medium and larger firms, or between pre- and post-Global Financial Crisis periods.

“R&D grant receipt is estimated to increase the probability of applying for a patent by 55 to 65 percent,” said Dr Adam Jaffe, lead author of the research.

“Project grants have much larger effects on innovation outcomes than capability building grants, which is to be expected, given the nature of each type of grant. Project grants raise the probability of product innovation and increase the share of sales due to new products. It seems that capability building grants can only boost innovative activity when they are subsequently accompanied by a project grant,” said Dr Jaffe.

This is indirect evidence that government assistance with limited funding is not effective in boosting innovative activity.

“Although there’s no way to know for sure if the differences between firms who are awarded funding and those who aren’t has created a selection bias in our research, our findings are broadly in line with recent international evidence from Japan, Canada and Italy that found positive impacts of public R&D subsidy on patenting activity and the introduction of new products,” said Dr Jaffe.

“A few years ago, the Ministry of Economic Development researched the impact of these R&D grants on sales, employment and productivity growth. They found some evidence of impact for capability building grants in small firms, but no evidence of impact for R&D project grants. Reconciling these results will require more research, looking at the relationship between innovation and economic performance for firms, regardless of whether or not they receive government R&D support,” said Dr Jaffe.

The working paper “The impact of R&D subsidy on innovation: A study of New Zealand Firms” by Motu researchers Adam Jaffe and Trinh Le, was produced under the Longitudinal Business Database Partnership, along with “Measuring the innovative activity of New Zealand firms”, by Simon Wakeman (NZPC) and Trinh Le (Motu).

The Wakeman and Le paper shows that R&D expenditure and activity is increasing across Kiwi firms, but rates of innovation are dropping. This apparent weakening of the link between R&D and innovation in the private sector overall only reinforces the importance of understanding the impact of government R&D programmes, as studied by Jaffe and Le.

Of the firms in the LBD studied who received project grants:

Firms who received subsidies were also:

The impact of R&D subsidy on innovation: a study of New Zealand firms (2015)