Home » News » What did the global financial crisis do to house prices in NZ?

What did the GFC do to house prices in NZ?

The global financial crisis is still having an impact on New Zealand eight years later. Researchers at Motu Economic and Public Policy Research - a not-for-profit, non-partisan research institute – have just published an article in an international economics policy journal that looks at what happened to New Zealand’s regional housing markets after the global financial crisis hit.

The research by Arthur Grimes and Sean Hyland, shows that even temporary financial or population shocks have an influence on the housing market that far outlast crisis itself. They also found that the speed with which new houses are built to meet demand following an economic shock is a critical factor that affects how long fluctuations in the housing market will last.

Between April 2007 and April 2011 the real house price (the amount paid for a house adjusted for inflation) in New Zealand fell by 15.3%. At the same time new housing construction plummeted, with residential housing consents falling by 56%. 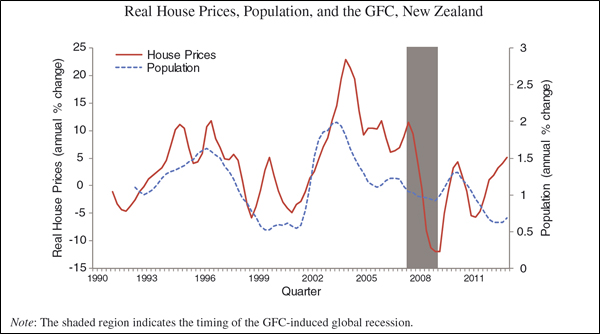 Grimes and Hyland looked at what effects two types of economic ‘shock’ have on house prices. First they looked at population shocks, like that which occurred in Manukau City between 2001 and 2006 when the city’s population increased by 16%, causing a surge in house prices. A shock such as this can cause house prices to remain elevated for at least nine years until supply can catch up with the increased demand for housing.

They then compared this to the global financial crisis, which caused a prolonged increase in credit restrictions by banks. This meant developers found it more difficult to fund new housing and prospective purchasers had their purchasing power curtailed due to restrictions on credit. The reduction in house prices caused a further decrease in new housing investment. The pendulum then swung the other way so house prices rose due to scarcity of supply. This cycle is still continuing today, though it is not as marked as it was during the global financial crisis.

So, both population and credit shocks cause long-term oscillations within the housing market. The key reason for this is the length of time it takes to build enough new houses to cope with the changes.

You can read the article Housing markets and the global financial crisis: The complex dynamics of a credit shock by Arthur Grimes and Sean Hyland in Contemporary Economic Policy Vol. 33, No. 2, April 2015 pp 315-333.

Motu Economic and Public Policy Research is an independent research institute operating as a charitable trust. It is the top-ranked economics organisation in New Zealand, according to the Research Papers in Economics (RePEc) website, which ranks all economists and economic research organisations in the world based on the quantity and quality of their research publications. According to RePEc, Motu has five of the top 25 individual researchers in New Zealand.

Housing Market Dynamics and the GFC: The Complex Dynamics of a Credit Shock (2013)