Home » News » Workers who lose their jobs are disadvantaged for years

Workers who lose their jobs are disadvantaged for years

Losing a job is well known to be one of the more stressful life events. What is less well-known is the impact of job-loss in the future and whether government benefits provide adequate support. 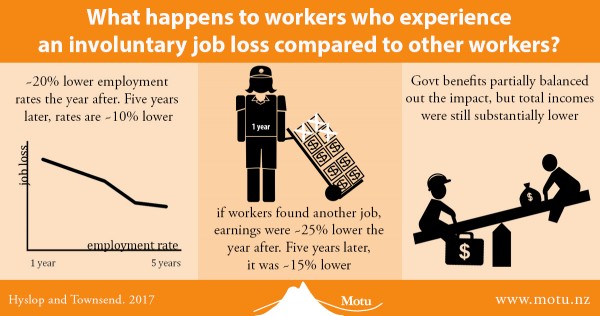 Workers who experienced an involuntary job loss have 20-25 percent lower employment rates the year after.

If workers found another job after an involuntary job loss, their earnings were around 25 percent lower in the first year of their new job and still about 15 percent lower after five years.

The impacts were worse for workers who lost jobs during the great recession from 2008.

“The employment effects for workers who lost their jobs in the global financial crisis was3-4 percentage points worse than for those who became displaced before then,” said Dr Hyslop.

Government provided benefits partially counterbalanced the impact, but the total incomes of those who experienced an involuntary job loss are still substantially lower.

“However, despite such income support, displaced workers’ total individual income was about 30 percent lower than comparable workers during the first year after displacement, and about 20 percent lower after five years.”

The larger employment impacts for workers displaced during the great recession from 2008, were also counterbalanced by 3-5 percent higher rates of benefit receipt.

“Impacts are greater for older workers long-term. So, even though workers under 30 experience a sizeable employment loss in their first-year after losing their job (about 18 percent lower employment rates, and 20% lower earnings if employed), the longer term effects of displacement are negligible.”

The analysis uses the Survey of Family Income and Employment (SoFIE) sample of workers over the period 2001–10, which is then matched to administrative employment and earnings data from Statistics New Zealand’s Integrated Data Infrastructure (IDI) covering the period 1999–2015. Displaced workers are those who reported an involuntary job loss associated with being laid off, made redundant or dismissed. The analysis focuses on workers who had been employed for at least one year before their job displacement.

The study “The longer term impacts of job displacement on labour market outcomes” by Dean Hyslop and Wilbur Townsend was funded by the Ministry of Business, Innovation and Employment.