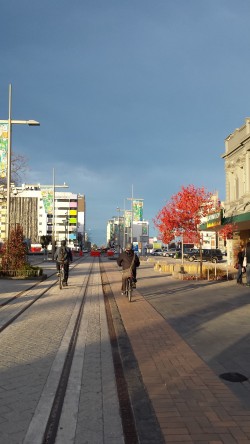 The 2010/2011 Canterbury earthquakes caused major upheaval to the people of the region. The second major quake killed 185 people, forced many from their homes, and closed Christchurch’s central business district. This paper examines the consequential effect on jobs and accumulated earnings for workers in Canterbury.

In addition, we examine concurrent decisions about employment location, including job-to-job transitions and regional migration.

While Canterbury workers’ employment outcomes were adversely affected in the short-run, those workers were more likely to have jobs three years later (relative to a matched control group), and to have higher accumulated earnings. At the same time, they were less likely to be at the same employer, and more likely to have migrated to jobs in other New Zealand regions. Impacts vary substantially by worker characteristics and by the naturally-induced geographic variation in the severity of the shock.

We show that the Earthquake Support Subsidy appears to have influenced the extent of outward migration decisions, at least for most types of workers, though not the long-term retention of the pre-quake job under which the subsidy was gained. We interpret these findings as evidence that the subsidy achieved its goal of delaying involuntary job loss and, as a result, fewer workers made immediate decisions to leave the region – decisions that persisted over the long-run.

That Sinking Feeling: The Changing Price of Disaster Risk Following an Earthquake

Before a Fall: Impacts of Earthquake Regulation and Building Codes on the Commercial Building Market